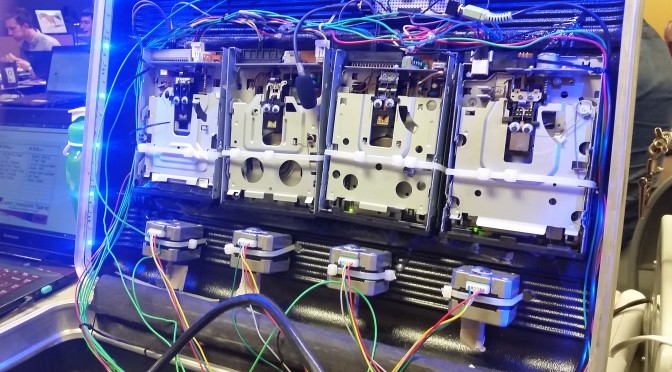 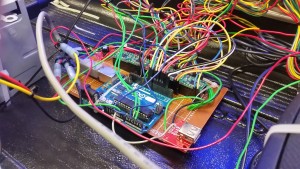 ^ My terrible wiring scheme. The Arduino communicates with the computer using Moppy, and sends the step and direction data to the Pololu drivers that run the NEMAs, as well as the floppy drives. 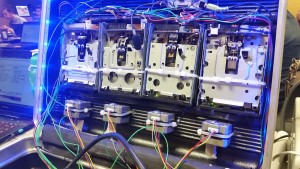 ^ The steppers, 4 NEMAs at the bottom, and 4 disc drives at the top.

^ A video of the box in operation

Oh, I know, I’ll build a music box! Using a open source software called “Moppy,” by github user [SammyIAm] that converts MIDI to steps on stepper motors, I wired up a total of 4 floppy drives I had lying around to an Arduino Uno, and wired that up to a desktop PSU. However, with only 4 channels (out of 16), sound quality was pretty poor. Also, the floppy drives had a tinny, clanky noise. Good for industrial music but didn’t work well with low tones. From my work with 3D printing, I have quite a bit of experience with NEMA 17 motors, I know they makes some nice low tones. Since I’m up to my eyeballs in A4988 driver boards (I can never plug those suckers in the right way), I wired a few up to some spare NEMA motors and got them running. And what an ordeal that was. So many soldering joints, I still have nightmares.

After putting them in an old black hard suitcase with all the fabric ripped out, I added a strip of LED lights and a bunch of zip-ties, and ka-pow! One mess of wires I call a music box. It actually works really well, however MIDIs with only one channel are extremely underwhelming.

I really need to build an amplifier for it, but noise and feedback are going to be killer, I can tell that already. Adding more drives increases the number of playable channels and make the music easier to hear. Perhaps I could add a battery?

Really cool toy. Takes up a little space, and looks a bit sketchy, but all in all, it’s a fun built-from-scrap invention.