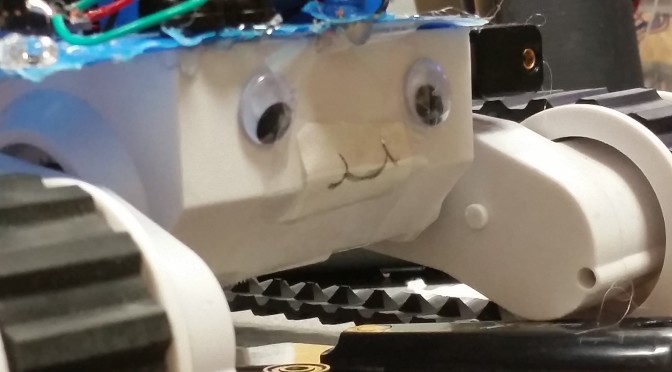 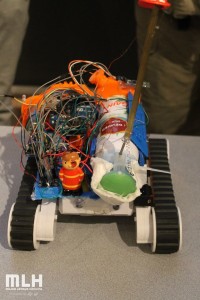 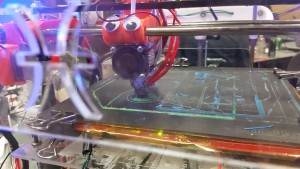 ^ PISCES working on the gear system 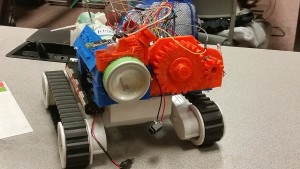 ^ The Back of Febrezebot, showing the gear train. 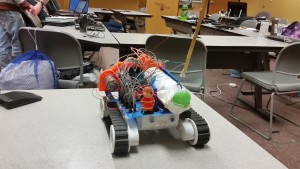 ^ The Lever arm used to pull the trigger.

What happens when you put a sarcastic Mechanic on a team with a sarcastic programmer and two sarcastic computer scientists? You get this mess.

Meet Febrezebot (Also refered to as “Fabreezebot” “Febreezebot,” “Febreezio” and “Fabreezio”, depending on who you talk to and what time you talked to them). The entire purpose of this robot, is to be a remote control car (via Bluetooth) that sprays febreze on command.

As a hackathon, this event lasted 36 consecutive hours, of which I was awake and working for 33, and my team didn’t fair much better.

The newest revisions to my PISCES 3D printer were largely untested until this event, and although PISCES is the godfather of all of my projects, the printer itself was not doing well. On revision 4 of the printer, I just added dual remote hotends capable of reaching 350C, completely changing the fundamentals of the printer, and, like any other engineering project, something went wrong. Problems occurred with belt slippage and power draw that left us with shoddy, half-finished parts and no time to repair them. Regardless, we made do with what we had. Oddly, however, PISCES was the life of the party, and she was posted to MLH’s twitter feed, and was actually very popular with interviewers and reporters. 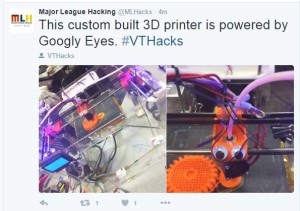 And after some much needed 3D printer-reheated pizza… 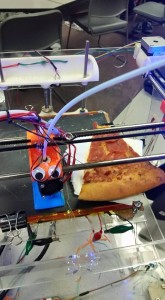 … we continued working, gluing, and bringing febreze bot to life from a pile of garbarge to a bigger pile of garbage.

By hour 28, we were pretty much just killing time. We had to stay awake, lest we fall asleep and miss the closing ceremony. We, in our infinite wisdom, decided to go to Walmart at 5 in the morning. While there, we purchased 3 boxes of peeps, some disgusting gummy candy, and, most importantly, a $5 firetruck toy.

The second we got back to the Hackathon, we dismantled the firetruck, mounted the siren used for it to the Febrezebot, and wired it to play when we fired the febreze. By then, we were finishing up some last minute things, but we made no further major changes. She was ready.

The next challenge was exposition of our bot. We brought her to the table, and started doing donuts and spraying enough febreze to choke ourselves. The response was overwhelmingly positive, and we got some comments including “as far as actual hacking goes, this is probably the best hack.” Since the four of us were basically comedians, we made it extremely interesting for all parties involved. By the end of the expo, we had made a lot of people happy, and burned out most of our febreze.

Then, we were called up. Despite all odds, we were selected as one of the top 8 teams, out of 56, and we were told we were presenting first at the award ceremony… in 5 minutes. We were completely dumbstruck that our stupid little robot compared to any of the actual software work that was put into the competition. Being masters of thinking on our feet, we kind of just pushed two of us to the front of the auditorium, and we started slinging jokes and shooting febreze at people. 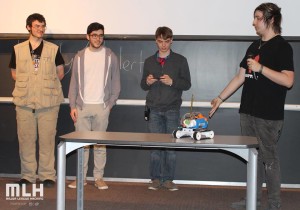 (Un)surpisingly, we weren’t selected for the top 3 teams that received prizes, but the fact we could throw together some jokes, 3D printed parts, and a febreze can and make a robot worthy of the top 8 in a MLH sanctioned hackathon is impressive in itself.

Febrezebot is currently sitting my desk, and I keep thinking of what else I can do with her. I have had people offer to buy bits and pieces of the bot, but I feel like there is more that can be done.

[Update: Febrezebot was mentioned in the Summer 16 issue of VT magazine!]

While this was kind of a one-off dealio, we might consider attaching a febreze can to a drone. That would be dangerously fun. Febreze effects on electronics remain to be seen.

I am actually really proud of our team. I was the only mechanical engineer, and the rest of the codemonke– I mean computer scientists – did a great job throwing together enough garbage, terrible wiring schemes, and dank, dank memes to make a functional robot.