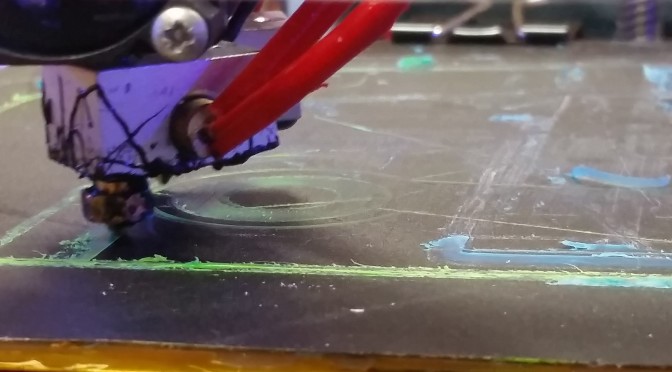 So I want to talk a little bit about my 3D Printer, PISCES. Aside from possibly my wrist mounted phone case, which is used on a daily basis, my 3D printer is one of my most used creations. PISCES recently passed her 600 hour usage mark, so now is probably the best time to go back and explain the processes and history behind the bot.

The printer, originally designed to 3D print steel MIG wire, has since been demoted (for now) to just printing thermoplastics, and it is the godfather of my other 3D printers. Some have been built and sold off, some are part of my company, some are under construction, and some are gone, but PISCES was my first jump into the realm Moreover, from the original design, there have been roughly 4 revisions to the print head and drive system, and each time has seen a major jump in quality.

The original design for the head was a sort of cantilever, with a verticle bar arrangement based off the Stratasys uPrints. However, this part was impossible to print easily, allowed for too much play, and overall, was a poor design.

However, that didn’t stop me, and in the summer of 2015, I took her to the international submarine races in carderock to assist in production of parts to aid in the repair of Phantom 6 and 7. Some parts printed on PISCES are still in Phantom 6. 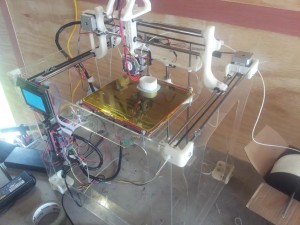 After that, I moved the system from a vertical to a horiz

ontal H-bot style, which greatly reduced wobble in the system, as well as adding microstepping to increase quality.

From there, I decided to lend a helping hand to local students at my college, and started offering 3D prints as a “pay what you think it is worth” format. More of my prints were around $10, with people offering between nothing and $20. I produced parts for students learning CAD, student design teams, and competition teams.

Not long after, I bought a second extruder, and adapted the head again to accompany it, allowing for multiple materials and support. I also added a glass bed, and some buildtak.

In it’s current state, I replaced the hot ends with an E3D V6 and an old V5-like one, and moved the extruder motors from on the gantry to off, greatly reducing the mass and size of the print head, upping speed and giving me more print area I lost with the second extruder.

I still produce parts for the Human Powered Submarine team, and some of the parts are going into the final sub.

Recently, PISCES was posted to Major League Hacking’s twitter page after I brought it to VThacks to produce Febrezebot, and we made it to the final 8 (out of 56) teams due in part to PISCES’s usage.

I owe a huge amount of opportunity and success to this printer, and even though it is pretty shoddy, it has opened more doors, given me more experiences, and helped more people than any other creation of mine.

One thought on “The Odyssey of PISCES”