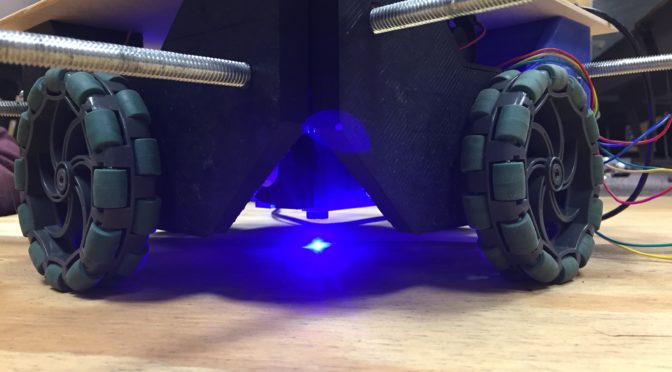 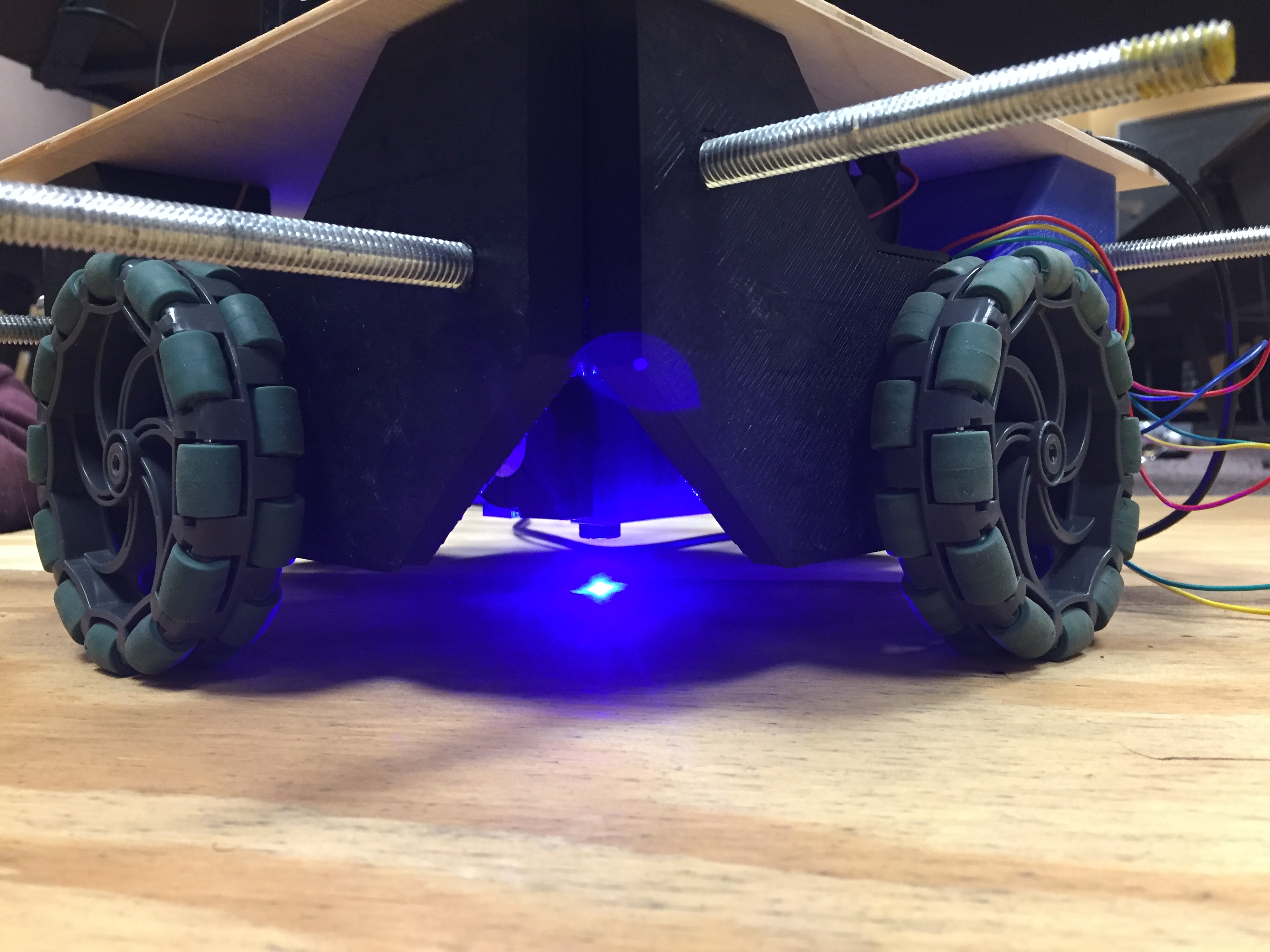 ^ The laser in operation 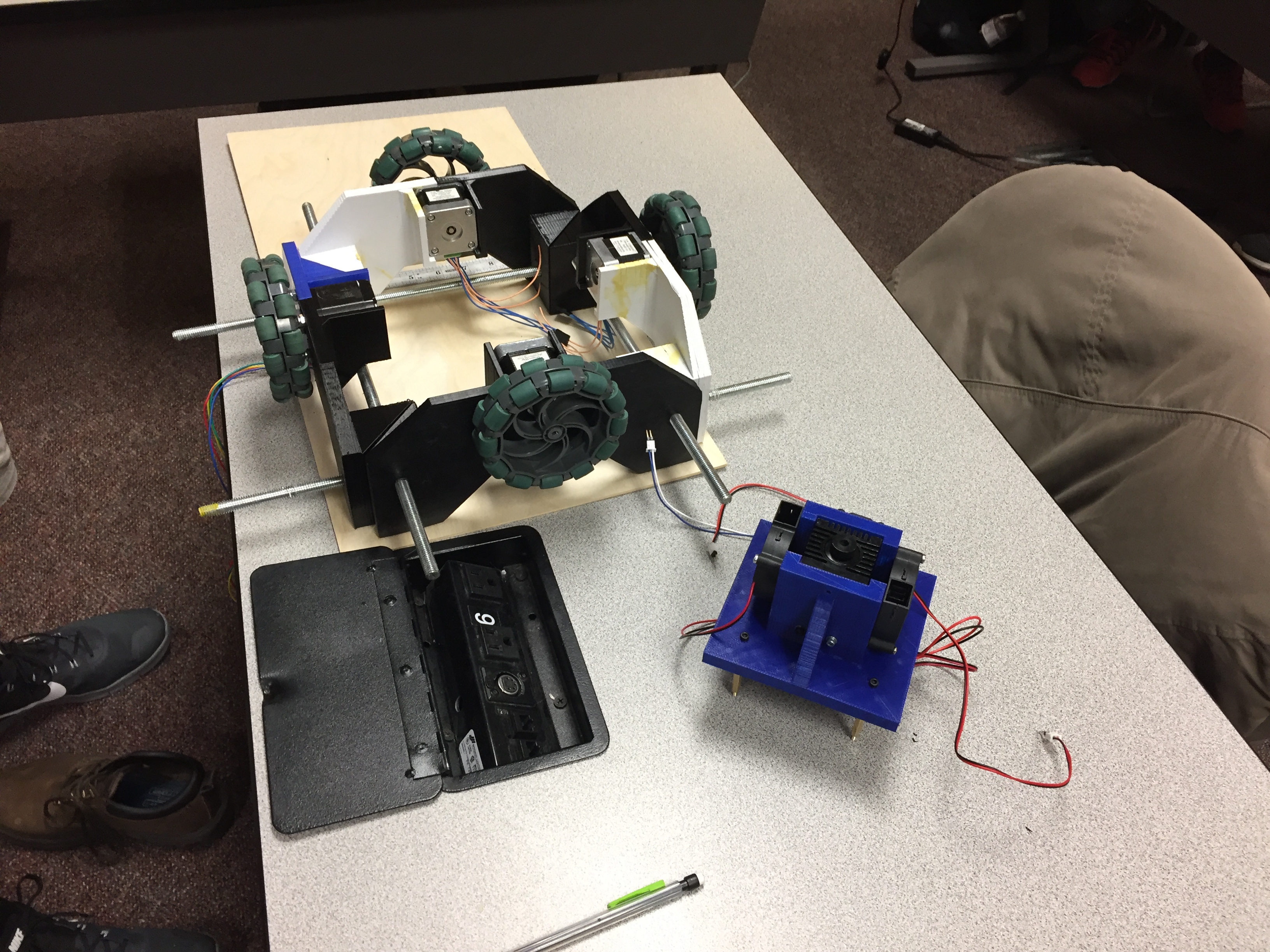 ^ The underside of the chassis, showing the laser assembly and the motors. The blower fans on the side of the laser are used to blow away smoke, provide more oxygen for cutting, and also to cool the laser. 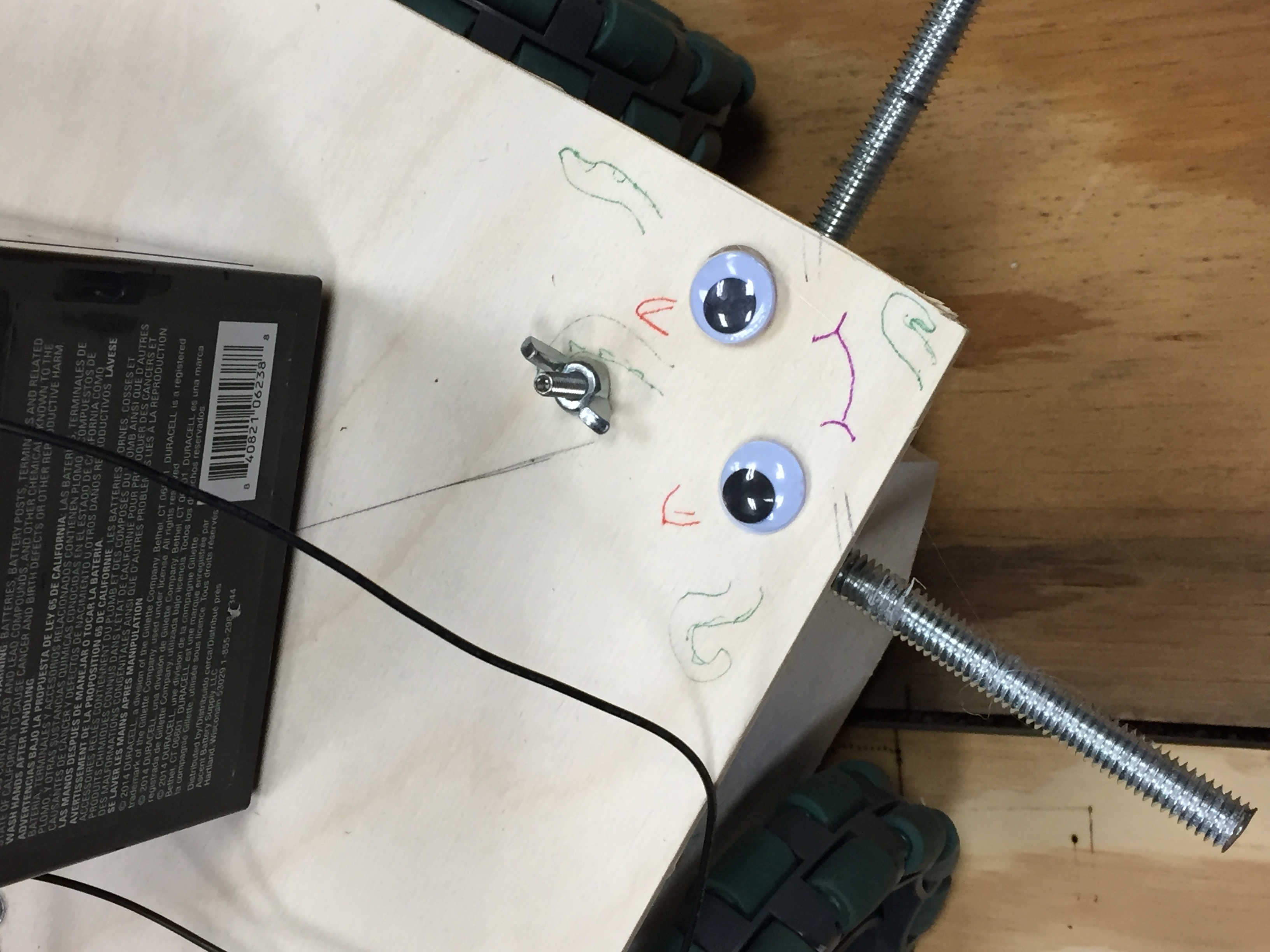 Riddle me this: How do you build a machine that can make parts larger than itself?

That was the theme that myself and 3 other freshman engineers took with us to VT Hacks IV, a 36 hour hackathon at Virginia Tech, and the second VT hacks I’ve been to. After the fun that was Febrezebot, we were looking to do something a bit more practical.

What we decided to put together was basically a laser cutter (we used a 2.5W UV diode laser), mounted on a holonomic drive attached to stepper motors. Because the process is in theory the same as a CNC laser cutter, we just spliced in standard CNC laser cutter firmware, and attached an SD card reader to it. The frame was made of 8 3D printed parts and 3/8″ threaded rod. holding it together.

The idea is pretty simple. You put it down facing in the direction of your X axis, press go, and it moves the wheels as if it was on axes, and a laser facing down will cut the part.

But why make this? Simple. If there’s anything I know about laser cutting or 3D printing, or plasma cutting, its that no matter how big your bed is, you always have to cut something bigger. This machine has no technical limitations, and it can cut a part 3 feet long as well as 10 feet, as well as 100 feet.

We managed to get it cutting, running, and reading GCODE pretty quickly (GCODE comes from Turnkey Laser’s Inkscape Plugin), but the issue we are having now is that the laser does not shut off. Even when hooked up to a FET, it just pull current even when the pin is low. There’s a way to fix it, but 4 sleep deprived students couldn’t find it, so we just attached it to a switch to control whether the laser was on or not.

Progress is being made on this, and updates will be posted as they are completed.

A bigger laser definitely. The 2.5W one in there now is nice for testing, but for any real, practical purpose, it’s just not good enough. The process is sound, and although it probably needs TMC drivers, or something with a smaller microstep, the theory is there.

As for going beyond this, while it does require a flat surface to work on, as well as the parts it cut not fall out (or else it will lose movement space), nothing says this process couldn’t be built with a plasma cutter to cut 50 foot steel plates. Just a thought.

Being that it was built by 4 people in 36 hours, I think it was a huge success. There’s a lot of bugs in it right now (including getting the laser to turn off! AAAAHH!), but overall it works wonderfully as a proof of concept. The team and I have recently added 3 more people to the development team, and we took it to a pitch hosted by VT entrepreneur club about a week ago.