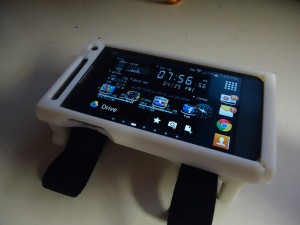 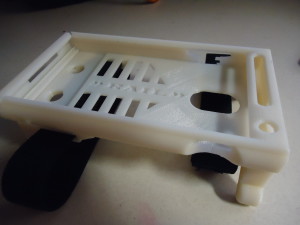 ^ The case without phone 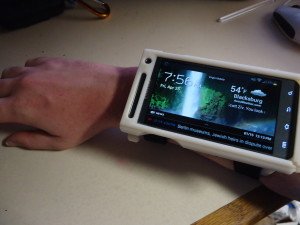 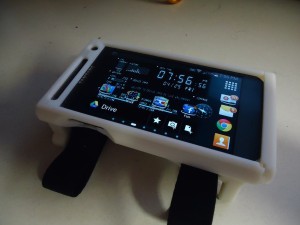 This is a rather simple idea that I cannot seem to find anywhere, so I had to 3D print it.

I have a Samsung Galaxy SII cell phone, and I wanted an engineer-style case that pushed the limits of conventionalism. Because I watch way too many movies about the future, I kept getting the image of some spy or astronaut with a wrist-mounted videophone. While almost all cell phones today have Skype, I surprisingly could not find a case that made this wrist-mounting thing happen. Using my android skills to expertly go to the app store and downloading a free app that rotates the screen 90 degrees, and a background that displays phone information (CPU usage, battery level, compass, etc.) in a fashion that fit the style, I began working on the case on Autodesk Inventor.

In the end, it turned out surprisingly well. After getting the print back, my excessive number of caliper measurements paid off, and the phone slid in without a hitch. I did, however, place the top groove too high, and cut the camera’s vision in half, as well as making the hole for the charging cable too small. I will eventually hit these with a Dremel, and that problem will fix itself.

For my first field test, I wore it, as well as my 3D printed glasses, light up duct tape tie, and laser-cut business cards to the rededication ceremony of the Frith first-year engineering design lab. While there, I met a number of my old professors, as well as the dean’s advisory board and corporate sponsors, who were attending to see how funding the Frith lab would be a good investment, and what freshman engineers could do. Everything was a huge success. One person even asked for me to email the IPT file for the 3D printed glasses to her, and another said that she was “surprised that I didn’t get a job offer on the spot.”